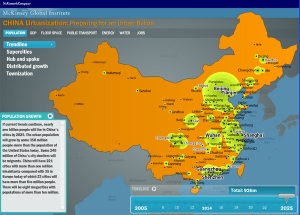 China's coastal east has benefitted most from the country's 30 years of dramatic growth. But the inland west may be catching up (albeit slowly)

The images that many in the world conjure up when thinking of 21st century China are a mixed bag of glittering metropolises (concentrated in the coastal east) and ancient sites like the Great Wall and Forbidden City. But these two extremes really don’t paint an accurate picture of the country as a whole, which is both vast and by-and-large underdeveloped. Although the Chinese government has worked to improve infrastructure and build up the country’s inland areas through the ongoing “Go West” campaign and stimulus spending, many smaller urban areas in China remain untapped resources for domestic and foreign investors looking to build their brands or expand their current operations in China.

This week, the Global Supply Chain Council looks at several areas in China  likely to become prime targets for foreign investment, as inland regions are further developed and median incomes grow. According to their findings, areas like the Midwest and even the restive Northwest are “blank slates” with real long-term potential:

Xinjiang, China’s largest autonomous region and a former key stop on the ancient Silk Road, has once again become a choice of investment in recent years despite simmering ethnic instability.

The giant French retailer Carrefour Group pioneered the trend, becoming the first multinational company in the region when it opened one of its supermarkets in Urumqi in 2004. Even as the region recovers from a recent ethnic clash on July 5, government newspaper People’s Daily reported that Jean Luc Lhuillier, vice-president of Carrefour China, said the group plans to invest more in Xinjiang.