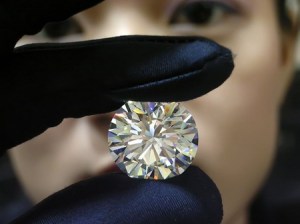 Diamonds are a "must have" for China's growing luxury consumer class

Falling demand for luxury products of all shades has vaulted China to the top of many lists this year, as demand in developed markets has fallen for everything from luxury cars to five-star hotels. With China’s massive population and growing middle class, even gradual growth in demand can mean a great deal for luxury brands, so diamond producers can continue to be optimistic about the potential for their products in China — soon to be the world’s second largest diamond market by sales, if the projections of Freddy Hanard, chief executive officer of the Antwerp World Diamond Centre, are correct.

As the Financial Times writes today, Hanard predicts that diamond sales in China should continue the double-digit growth they saw in the first half of the year to continue throughout the second, and says that sales could possibly double in 2010. As the thirst for luxury products continues to spread in China’s second- and third-tier cities, and wealthier Chinese maintain their desire to diversify luxury and high-value holdings — something that we have seen in recent years as they’ve increasingly purchased luxury cars, gold, rare watches and jewelry, fine wine, contemporary art from China and elsewhere, and real estate — diamonds will probably remain strongly in demand according to all indications.

“China is the world’s fastest growing diamond market. And it can go very fast. It is still discovering diamonds,” said Mr Hanard.

Gold remains the traditional symbol of wealth in China, but diamonds have become popular, especially for weddings. “When people get married, they want a house, a car and a diamond,” said Shaun Rein, managing director of China Market Research Group in Shanghai.

Benefiting from China’s strong economic growth, which ran at 7.9 per cent in the second quarter, the value of imported polished diamonds rose 12.7 per cent in the first half year-on-year to a record high of $300m, according to the official Xinhua news agency.