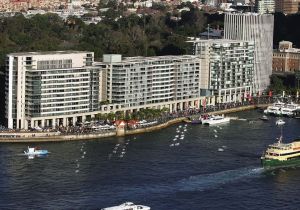 We have previously written on mainland Chinese buyers scouring the globe to snap up contemporary Chinese art, fine wines and antiques at auction, and in recent months this emerging group of shoppers has become far more visible in places like Australia, where wealthy Chinese buyers have become one of the most motivated buyers of luxury properties. As China Daily writes today, Chinese buyers are converging on some of the best luxury properties in Sydney including big homes on the harbor, and new condominium developments.

Chinese buyers are taking advantage of a number of factors that have benefitted them in the past few years, including a weaker global economy and lower prices on luxury goods of all classes, a stronger focus on spending rather than saving, and a more welcoming Australian property market. With an exchange rate that favors the yuan, relaxed Australian rules on ownership of property by foreigners, and an already populous Chinese community, the time seems right for Chinese with the means to buy some of Sydney’s prime waterfront real estate.

As Jack Levine points out, Australia has become one of the most popular destinations for Chinese travelers, students, and immigrants in the last decade, trailing only the UK and New Zealand:

“In many cases, Chinese immigrants to Australia are buying into key lifestyle markets, which are characterized as being close to the ocean or within the inner-city,” said Tim Lawless, national research director at RP Data, a property and analytics information company.

In March, Chinese businessman Jiang Mei bought one of the most expensive houses ever sold in Sydney, an inner-city, Point Piper house for $32.4 million.

This set off a buying trend. Chinese buyers paid $14.5 million for a home at Rose Bay, and then a Shanghai couple bought in the same waterfront suburb for $15 million. Another Chinese couple bought a $5.8 million house, and a Chinese investor bought a smaller, second property for $1 million, with plans to rent out the home.

Raine and Horne, an Australian real estate agency that negotiated the Point Piper house deal, said interest from the Chinese mainland picked up by about 15 percent at the beginning of 2009.

In March, Australia’s Foreign Investment Review Board (FIRB) introduced dramatic changes to rules governing foreign buyers, including that all apartments in new projects can be sold to foreigners. Previously, only half the apartments in a development could be sold to overseas buyers. Student visa holders who live in Australia are no longer limited to spending only $300,000 on a property.

In China, some people have concerns that a serious asset bubble is developing in real estate, so overseas markets are starting to look cheap by comparison.

“I think we will see Chinese corporate and institutional investors start to turn to real estate investment opportunities elsewhere,” he said, noting that Australia and the US are key markets.

One real estate agent who deals with top-tier properties said more Chinese than ever are looking to buy in Sydney. Many Chinese want to migrate to Australia, either because their children attend school there, they are considering retiring, or they want to buy investment property.

“You only get to know they have purchased by looking at completion records, available after a sale,” she said. “It is said in some circles that a majority of houses with the best Sydney harbor views will be owned by Chinese people in a few years.”

She cited a list of the top 100 house sales in Australia for 2008. “A lot of the names of the buyers were Chinese,” she said.

One response to “Chinese Snapping Up Australian Luxury Properties”