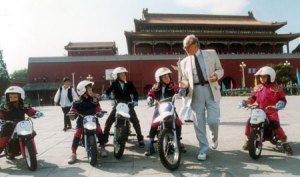 Pierre Cardin has become one of the most recognizable and coveted foreign brands in China since entering the market in 1978. Photo (c) CRI English

Mixed signals surround the rumored takeover of the Pierre Cardin brand by two Chinese groups, which would — if true — illustrate the speed with which Chinese companies hope to attain global reach and influence. Early reports appeared to suggest that an acquisition of only Cardin’s China operations was imminent, but statements by the brand’s China director, Fang Fang, insinuated that the company was open to the idea of a wholesale takeover of its global assets. Although Pierre Cardin himself has denied these rumors, the story is making waves in the Chinese and global business press.

As one of the first western brands to enter the Chinese market after the government initiated its “opening and reform” policies in the late 1970s, Pierre Cardin carries significant brand equity in China, a point which gives this story extra importance in the grand scheme of Chinese luxury branding. As the AFP pointed out today, the acquisition of the Pierre Cardin brand by a Chinese company would be, in the mainland at least, considered a point of pride: