China And Hong Kong Get Ready To Begin Bilateral Trade Scheme, Announced Last December. What Will It Mean For Holders Of Portable Chinese Assets Like Art? 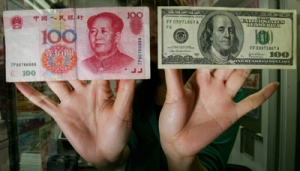 The internationalization of the RMB could be a huge plus for holders of portable Chinese assets in coming years. Photo © Reuters

The internationalization of the Chinese yuan has hit a major milestone, as China’s Central Bank Governor Zhou Xiaochuan, and Joseph Yam, chief executive of the Hong Kong Monetary Authority, today signed a memorandum in Hong Kong to set off bilateral trade that can be settled in Chinese yuan rather than Hong Kong or U.S. dollars. The move, which follows similar “currency swap” agreements signed by China and Argentina, Malaysia, and South Korea in recent months, illustrates the urgency with which China’s Central Bank is looking to globalize China’s currency. While none of this is really “new” to China-watchers, the importance of this story — and the story of China’s rapidly-internationalizing currency — is in what it means for investors who have “bought into” China. While it won’t mean much for holders of Chinese real estate or stocks, the real story here is in portable goods, an area which we have covered in detail several times before. With the globalization of the RMB comes a revaluation of portable goods (which can be carried across borders and converted into alternate currencies).

In itself, the agreement between China’s Central Bank and the Hong Kong Monetary Authority is interesting and an important step. Coinciding with the 12-year anniversary of the Hong Kong handover, the move shows an assertiveness for China to streamline trade with its neighboring countries and territories and push for a wider sphere of trade influence in the region. As Reuters writes today,

China is looking to introduce similar Chinese currency settlement schemes with other trading partners. On Sunday, China and Brazil said they were working on an arrangement to allow exporters and importers to settle deals in their local currencies, bypassing the U.S. dollar, but gave no details.

Zhou told a joint press conference in Hong Kong that the city was a good testing ground for the scheme.

All Hong Kong companies will be able to participate in the scheme and Zhou said he expects a few hundred Chinese companies to join the scheme on a trial basis. Yam told a joint press conference that he hoped the scheme will start in July.

The scheme will expand Hong Kong’s role as an offshore centre for trade in the Chinese yuan and test ground for the currency’s gradual liberalisation.

In April, Beijing said the Chinese cities of Guangzhou, Shenzhen, Zhuhai and Dongguan in southern Guangdong province, neighbouring Hong Kong, as well as Shanghai would start the trial scheme.

In the past five years Beijing has started to allow the yuan to be used in Hong Kong. Local residents can open yuan bank accounts while financial institutions can issue yuan bonds in the territory. Some shops accept payment in the Chinese currency.

The launch of yuan trade settlement is another step in the gradual internationalisation of the Chinese currency. Since December Beijing has also arranged six bilateral currency swaps, totalling 650 billion yuan ($95.12 billion) with trading partners including Hong Kong, Argentina and Malaysia.

So what do these currency swaps, and the internationalization of the Chinese yuan mean for the holders of portable assets (antiques, artwork, jewelry, etc.)? The answer to this lies in the idea of these items — particularly art — being “hedges” against inflation. As we’ve said before, art is, in essence, China in portable form. So, by purchasing a piece of Chinese artwork in RMB (or dollars, or whatever currency) in China, then taking it home — wherever that may be — with a more international RMB on the world stage, you can more easily convert this piece of portable China into liquid assets.

Currently, with the non-convertible nature of the RMB, this is somewhat harder to do. And, with a more international (and, thus, stronger) RMB, artwork will valuate and fight inflation. None of this is particularly mindblowing for savvy collectors, but for investors who want to get in on a piece of the “action” in China, it is a good option — particularly if they hold on to the art long enough for the yuan to become a truly “global” currency.

As we wrote the last time around:

As the RMB gains both value in relation to other global currencies, holders of Chinese assets (particularly the portable ones) stand to gain from measures currently starting out, from China’s call for a more flexible world currency, to China’s early experiments with currency swaps, to the growing Chinese buyer base for assets of all kinds. Although individual markets may look like a rollercoaster sometimes — and art is no exception — macro-level issues existing outside of the art world, taking place in the meeting rooms of the IMF and in economic negotiations between two countries’ finance ministries, will inevitably affect the price of all types of assets in coming years — Art is no exception.