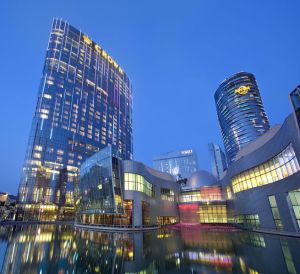 City of Dreams is one of the world's most high-tech, feature-heavy casino and entertainment complexes

We have written several times before on the efforts of Macau’s tourism department to draw in guests from neighboring Mainland China and Hong Kong, as well as foreign guests from the periphery of East Asia and elsewhere. But despite the department’s efforts, overall confidence levels have been spotty at best in the last year, with some entertainment companies, like the Las Vegas Sands Corp., dramatically cutting back in Macau. However, this month there has been good news coming out of Macau’s glitzy Cotai Strip (the city’s answer to the Vegas Strip), with the opening of Melco’s “City of Dreams” casino, a $2 billion project that features 516 gambling tables in a 420,000-square-foot casino, Hard Rock and Grand Hyatt hotels along with a multimedia theater and shops run by DFS.

According to the casino’s owners, City of Dreams is designed to be one of the world’s most advanced gaming complexes, offering a sort of all-inclusive departure from many of Macau’s more old-fashioned gaming centers, but still remaining close enough to the city’s traditional tourism draws to appeal to a wide tourist demographic. With the unusually large investment that Melco has made in this project, however, it is clear that the company is not simply trying to pull foreign tourists away from its rivals, it is also trying to crack a market that has frustrated other casinos for years — the Mainland or Hong Kong gambler. While this group obviously comes to Macau often and spends freely, the problem has traditionally been getting these individuals to stay in Macau for more than one or two days. With the huge array of amenities at “City of Dreams,” Melco is showing their ambition to get this demographic to respond.

Bloomberg illustrates how much effort the company has put into this casino, and the risks involved with investing so heavily in the midst of the global economic downturn:

City of Dreams, across the road from Asia’s largest casino resort, the Venetian Macao operated by billionaire Sheldon Adelson’s Las Vegas Sands, will test Macau’s plan to turn the reclaimed swamp of Cotai into a gambling and entertainment center that surpasses Las Vegas. Adelson suspended construction of a second property on the strip in November as revenue fell and credit markets seized up.

“The gaming sector had a very bad year in 2008 because of a weakening Macau economy,” Winson Fong, who helps manage $2 billion at SG Asset Management H.K. Ltd., said in an interview. “Now, people are buying into the sector because as a speculative one, it tends to perform better during a recovery,” said Fong, who doesn’t invest in casinos for ethical reasons.

Melco Crown, a joint venture between Lawrence Ho and Australian billionaire James Packer, has created a complex designed to get visitors to stay for longer by providing a entertainment, shopping and dining in addition to gambling. City of Dreams will host a permanent show designed by Franco Dragone, director of Celine Dion’s show in Las Vegas.

City of Dreams will need “much less” than the Venetian’s 70,000 daily visitors, Ho said in an interview today, declining to be more specific on the company’s metrics for measuring the success of the project, which is also next door to Las Vegas Sands’s stalled 20,000-room project, which would include Shangri-La and St Regis hotels.

The opening of Macau’s second-largest casino may be the “tipping point” for Cotai, CLSA Asia-Pacific Markets analysts Aaron Fischer and Huei Suen Ng said in a May 27 research report.

“The Venetian does attract visitors down to Cotai but is not strong enough on its own to retain visitors for the entire trip,” Fischer and Huei said. The City of Dreams’ addition to Cotai could lead to the area turning into the “the first stop” for gamblers, they added.

While the City of Dreams may help raise the average length of stay of Macau tourists, “I don’t think it will help raise average visitor stay beyond two days,” Gabriel Chan, a Hong Kong-based analyst at Credit Suisse Group, said in a phone interview today. “In Las Vegas, there are all these different shows. In Macau, now there’s just Zaia by Cirque du Soleil at the Venetian. There are more than 10,000 circuses in China, I don’t think they will be attracted to such shows.”

Visitors to Macau “tend to visit around three casinos on any visit to Macau and they lose on average 50 percent of their gaming budget in the first casino with 30 percent in the second and 20 percent in the third,” the CLSA analysts said.

It’s anyone’s guess whether the Cotai Strip can finally entice the elusive Chinese gambler to stay more than a couple of days. Perhaps it just takes time. Once these gamblers start to bring their families, and look for entertainment and gambling in equal measures, the city can live up to its Vegas-like vacation and resort potential. For the moment, though, the ambitious plans of casino operators and Macau’s tourism department could go either way. With the growing travel and tourism potential of the mainland market, however, within 5-10 years I think we’ll find that the Cotai Strip may be one of South China’s greatest tourism success stories.