From Individual Collectors To Hedge Funds, Asset Allocation Is The Name Of The Game

We have written several times about contemporary art’s value as a hedge against inflation, and discussed several contemporary Chinese artists whose work is increasingly being purchased by everyone from individual Chinese “New Collectors” to major world museums like MOMA and the Getty. Since there are a number of large-scale auctions scheduled this summer, from auction houses from Sotheby’s and Christie’s to their emerging counterparts China Guardian and Poly from China, Korea’s Ravenel, and Indonesia’s Borobudur, what should those interested parties know about what’s out there in Chinese art?

One example of a buying opportunity that is both iconic and genre-defining is the “Legacy Mantle” series of sculptures by top Chinese sculptor Sui Jianguo. “Legacy Mantle,” large aluminum representations of Mao Zedong’s famous jacket, have been installed in prominent galleries and museums, as well as New York’s Asia Society — where a Legacy Mantle was installed for three months late last year.

Sui is perhaps China’s top contemporary sculptor, and his large-scale pieces reflect the artist’s concern with the perception of China around the world. His pieces typically mix humor with an underlying discomfort, and make the viewer question his or her deeper understanding of Sui’s motivation. As this San Francisco Weekly piece from 2005 illustrates, Sui embodies the true spirit of contemporary Chinese artists, and his pieces bring together the disparate aspects of the Chinese art world — constant transformation, curiosity, tradition, and attention to detail.

China’s emergence as a major player in the global economy is precisely what induces institutions like the Asian Art Museum to take serious notice of present-day artists like Sui, whose work appears to have more in common with contemporary Western art than with the traditional arts of Asia.

Sui’s engagement with consumer culture is undoubtedly influenced by a pop art aesthetic dating back to Andy Warhol‘s famous soup cans, but because the artist trained during the Cultural Revolution, his work is also anchored in the conventions and motifs of socialist realism — a style exemplified by the happy, red-cheeked peasants depicted in communist propaganda — even as he transforms or comments on them.

Zhang Xiaogang's early "Untitled" (1989) piece is up for auction this week. His works are some of the most valuable contemporary paintings in the world, and are expected to remain so for years to come

Another example of what’s out there and up for auction is the work of Zhang Xiaogang, China’s most successful living painter. Zhang’s work is sought after by everyone from collectors to galleries and museums, and he has rapidly established himself as China’s emininent contemporary artist. One of Zhang’s early pieces, “Untitled” (1989) is up for sale this week, and is a good example of Zhang’s trademark style — Zhang’s work is highly valued, and is expected to remain some of the most valuable and iconic contemporary Chinese artwork over the long term.

Along with artists like Sui Jianguo and Zhang Xiaogang, Christie’s Hong Kong auction includes many artists whose work is a good example of what is worth looking into for funds and collectors. Cai Guo-Qiang, one of the most important Chinese artists (and who we’ve profiled before), is included in this sale, and his “Rebuilding the Berlin Wall: Project for Extraterrestrials No. 7” (1990) — sure to become a representative work of contemporary Chinese art — has an estimated value of a little over $1 million. Other works by important artists like Zeng Fangzhi, Wang Guangyi and more show that the inclusion of these artists in western and Asian auction house offerings means that they have solidified their place in the pantheon of top artists — and that collectors and funds should take note, since the Zhang Xiaogangs and Cai Guo-Qiangs of today will become as important representatives of Chinese artwork as Picasso and Van Gogh are for western art.

All of this goes back to one of our strongest points, that the eastward shift in the auction business (and collecting dynamic) shows that Hong Kong is an increasingly important and influential art center, whose power eminates outward throughout Asia. As Bloomberg points out, 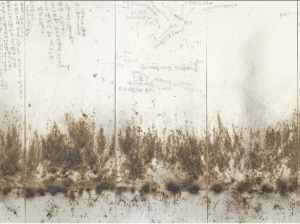 We’ll have to see what figures come out of auctions this summer. There are mixed signals about the confidence of bidders, but as Bloomberg goes on to say, gradually warming purchaser confidence — which has been reflected in the growing clout and numbers of Chinese and other Asian art buyers — has the potential translate to a better-than-expected market.

The Artprice Global Index, which tracks sales of fine-art works, says art prices track stock and currency markets. The MSCI Asia Pacific Index, which charts the region’s stock-market movement, has risen to 130, the highest this year, compared with an average of 99 on the days Sotheby’s held its auction.

“The mood has improved,” said Tian Kai, a Beijing-based contemporary-art dealer and collector, a regular at Hong Kong auctions. “People are more optimistic and willing to buy.”

6 responses to “Buying Opportunities in Contemporary Chinese Art: It’s Now in the East!”