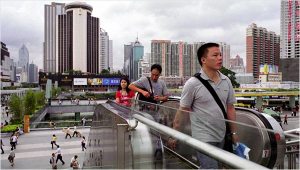 The Financial Times has an excellent article today about the rise of the Chinese consumer, once a virtually non-existent market but now the darling of the world’s multinationals.The article details how the Chinese government is trying to get consumers to make the shift “from export-oriented growth to a greater reliance on inner dynamism,” much like the United States did in the 19th century. Going along with observations I have made before, much of China’s current growth and transition is comparable to the same events in the US roughly 100 years ago — from the problems with quality control and political issues, consumer reluctance to spend, and business “grey areas.” The article is well-researched and focused, and includes many valuable insights into the monumental task ahead for the Chinese government — transforming the spending habits of over a billion individuals, who have been accustomed to high savings rates (for cultural reasons as well as China’s lack of a social safety net) and a lingering distrust of less established domestic brands (particularly since the reforms of 1978-79).

But the key to this article is its surprising (and incredibly significant) observation is its figures about the exponential growth of the inland, third-tier city consumer. This consumer segment has only now come to light, and as we have discussed before, inland Chinese cities look to be the future; not only for individuals, but for businesses and marketers as well.

[E]vidence suggests the conventional view of an export-dependent, river delta-driven economy no longer matches the reality. The argument here is not that trade has somehow become unimportant to China, but rather that the energy generating the world’s fastest economic growth rate this year is increasingly coming from within.

A series of indicators reveals the shift to “China Continental” – the transition of the world’s most populous country into an increasingly self-propelling economic force. There are caveats, of course, but first the evidence.

Retail sales have held up much better in China this year than in other big economies, growing at a real 15.9 per cent in March year-on-year. But more important than the overall trend is the composition of the retail spending.

The most robust consumer spending figures are coming from inland and lower-tier cities rather than from the traditional growth powerhouses clustered around the Yangtze and Pearl river deltas. A China Confidential survey assessing consumer spending intentions among an estimated 64m middle and upper income households in 189 cities in March showed a much higher propensity to spend in lower-tier cities.

One upshot of this trend is a corporate rush to capture the spending power of the inland consumer. In sectors as diverse as hotels, paid-for education and general retail, companies are seeking to offset slackening sales growth in the big coastal cities by embracing China’s continental geography.

Wal-Mart plans to increase the number of its stores from five to nine in Chongqing, a city 2,500km up the Yangtze river from Shanghai. This will mean it has more stores in Chongqing than in Beijing or Tianjin.

Other signs of the China Continental theme can be seen in the fact that domestically bound cargo traffic through ports is increasing year-on-year, while foreign trade volumes are slumping. Property transactions are surging across the country.

Recent key reforms may also work to create inner-dynamism. A healthcare plan, which envisages spending Rmb850bn ($125bn, €100bn, £85bn) until 2011 on basic health insurance and grassroots clinics, is intended, in part, to expand disposable income. The spreading monetisation of agricultural land, under which farmers have started to use land as collateral for loans or as registered capital for setting up companies, has the potential over time to transform the rural economy.

The unlocking of inner sources of strength will be crucial for China if it is to grow robustly in the face of declining global demand. Foreign trade for the first quarter fell 24.9 per cent year-on-year, but overall gross domestic product grew by 6.1 per cent during the same period.

Some of this growth has come from the initial implementation of a Rmb4,000bn fiscal stimulus package, but the bulk of planned infrastructure spending has yet to get under way.