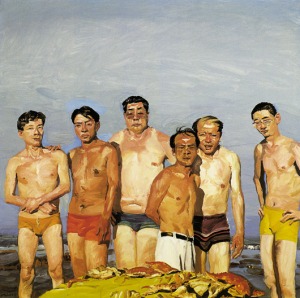 Two simultaneous exhibitions of Chinese Contemporary Art are bringing artwork from dozens of top Chinese artists to crowds in Boston and Brisbane, showing off the respectable collections of Uli Sigg (Boston show) and Nicholas Jose and Claire Roberts (Brisbane). The Boston Globe writes that the important works from Sigg’s extensive and exhaustive collection have provided guests with a great introduction to China’s thriving art world:

The Peabody Essex show provides a chance not just to see the recent flourishing of art in China as the fascinating historical phenomenon it is, but to try to spot the artists who really matter. The show is taken from the celebrated collection of Switzerland’s Uli Sigg, a former Swiss ambassador to China and North Korea, who began collecting Chinese art in the early 1990s.

“Mahjong, reveals a generation of artists making full use of new freedoms and confidently exploring a host of media, from ink painting and installation to performance and photography. The respect for antiquity and tradition that is one of the pillars of traditional Chinese art gives way in “Mahjong not just to a burgeoning interest in personal expression but to new forms of satire, critique, cynicism and lament.

The writer goes on to call particular attention to the contemporary realist works of artists like Liu Xiaodong, pointing out that he himself finds something to be desired in China’s “Cynical Realist” camp, and concludes that the scale of this impressive traveling exhibition leaves a powerful impression among guests, and is an excellent cross-section of China’s vibrant art scene:

The main body of the show is divided into themed sections. In a section called “Urban Transformations,” look out for the Luo Brothers’ wonderfully witty lacquered collage, a parody of hamburger and Coke-fueled consumerism; Cao Fei’s seductively satirical animation of a fantasy city set to mindlessly twittering muzak; and the photos that document a famous work by Wang Jin: In response to a 1996 government commission to design a sculpture for a shopping mall, Wang built a wall (a powerful symbol in once-isolationist China) using blocks of ice. Embedded in these blocks were consumer goods such as cellphones and designer handbags. A crowd gathered, and a near-riot ensued as people jostled and hacked at the ice to get the items.

In the final section, devoted to artists who take up traditional methods or subject matter, it’s hard not to be tickled by Liu Wei’s huge digital photo It Looks Like a Landscape. The work resembles a traditional ink painting of misty mountain peaks. It takes a minute to see that the forms are the variously hairless and hirsute bodies of standing humans, bent over double.

“Mahjong” will continue at the Peabody Essex Museum in Salem, Mass., through May 17. 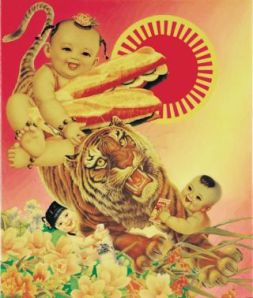 Included in the China Project -- The Luo Brothers

On the other side of the globe, Brisbane’s “China Project” brings together a wide swathe of important and emerging contemporary Chinese artists, providing visitors there with a slightly more edgy selection of works, focusing on artists whose work is informed by their personal experiences from — and the enduring legacy of — China’s Cultural Revolution, the period of political and social upheaval between 1966 and Mao’s death in 1976. As The Australian writes:

The China Project, which sounds rather like a working title that stuck, is really three exhibitions rolled into one package. The main show is a survey of the gallery’s own holdings of Chinese art produced in the past 30 years, including works given by Nicholas Jose and Claire Roberts, and with the addition of a number of loans. The second exhibition is a retrospective of one of the most prominent contemporary Chinese painters, Zhang Xiaogang, and the third is a smaller selection of works by the Australian-born photographer William Yang.

The pressure of reality and the urgency of the response to oppression are, of course, what give Chinese art of the ’80s and ’90s a much greater authenticity than the largely effete and commercial contemporary art of the West. This is not to suggest that one must live under tyranny to produce great art; but there must be some kind of tension and necessity in the relation of artist to society. Contemporary art in the West exists in a depressurised milieu in which almost every gesture is gratuitous.

Most of the artists included in this exhibition were children or teenagers during the Cultural Revolution and some of them were deeply disturbed by the abuse suffered by their parents. But one set of works in the show brings back the dark years with absolute matter-of-factness. Li Zhensheng was a young photographer for a regional newspaper at the time and he shot countless rolls of black-and-white pictures: Red Guards marching through the countryside, workers huddled around to hear an edict from the party, individuals being tormented and humiliated for their allegedly counter-revolutionary activities. All his negatives were carefully hidden and preserved, and now they tell the story plainly, without rhetoric, with the deadly weight of fact.

Both of these far-flung exhibitions, with their huge selection of artists, are an excellent introduction into the vast world of contemporary Chinese art for those who are interested but have yet to see much beyond the occasional Mao pastiche. The explosion of creativity we have seen in China’s contemporary art world only in the last 30 or so years is of a scale hard to believe, as if the period between 1949-1979 (while not completely without art, albeit of a Stalinist/Maoist Socialist Realism flavor) had just built up the creative pressure among China’s creative community, and the opening of the 1980s finally allowed a conduit for that energy, which we are still seeing expressed now by hundreds of world-class artists in China. If you are anywhere near Brisbane or Boston, you really should drop by before these exhibitions wrap up. But if you’re not, as I’ve written before, Chinese art should be coming to a museum or gallery near you very soon.