Chinese Art Coming To a Museum Near You

Yesterday, we wrote about the Getty Museum in Los Angeles acquiring photos by Chinese artists Wang Qingsong and Hai Bo, and described how the leap from gallery or personal collection to museum solidifies an artists’ or a country’s artwork, giving it validation and ensuring longevity. Since then, we’ve been keeping an eye out for articles on this topic, and are finding that the story has been picked up pretty widely, with each outlet throwing in a little more detail.

Georgina Adam has a piece today in the Financial Times about the Getty’s acquisition, making the case that this is a major step forward for Chinese art, and a real validation of the quality of China’s contemporary artists:

Chinese contemporary art is little represented in US museums, but a significant step was taken last year when the Museum of Modern Art in New York acquired 28 photographs by 11 contemporary Chinese artists. They included work by Ai Weiwei, Rong Rong and Huang Yan, and were bought from the US collector and publisher Larry Warsh.

It is the Getty’s first big acquisition in this field. The works are by Wang Qingsong and Hai Bo, and include Hai Bo’s “I am Chairman Mao’s Red Guard” (2000), showing the same person now and when she was a young militant, and Wang Qingsong’s dolled-up “New Women” (2000, pictured). “The Getty has one of the largest collections of photography in the world, and it is important for it to add Chinese contemporary photography to its holdings,” says Warsh.

“It is the start of a new era for the museum, and with the large Asian-American community in California, the acquisition also enables [the museum] to connect with this audience.”

By all indications, the Getty’s choice to add these artists to its extensive photography collection should be followed by other museums. As the quote in the FT piece suggests, the acquisition of these works is showing signs that a global trend is beginning to take root — in an important, but still relatively quiet, scale. As Art Radar Asia points out, the Getty follows

the Museum of Contemporary Art in Los Angeles, and the Brooklyn Museum, as well as global institutions such as the Tate and the Pompidou Center [in acquiring major works of contemporary Chinese art].

Additionally, we’ve seen news about further acquisitions in important venues like the Sackler in DC, the Seattle Art Museum, and Museum of Contemporary Art in Chicago. What really sets these recent purchases apart (and makes them noteworthy to me — hence I write about them twice in two days) is the depth of these purchases. Museums are interested in the Yue Minjuns and Zhang Xiaogangs, naturally, since they are the superstars of Chinese art, but the Getty’s choice of Wang Qingsong and Hai Bo — famous artists, certainly, but more importantly, serious artists — is fascinating. Wang Guangyi‘s paintings are beloved by collectors for their humor and seamless satire of both consumerism and communism, and the smiling faces of Yue Minjun are either sinister or life-affirming, depending on your mood and viewpoint. But, as RedBox Review illustrates, the photography of Wang Qingsong and Hai Bo touch on much deeper (and in Hai’s case, rawer) issues to the Chinese themselves:

Many non-Chinese art lovers may marvel at the vivid color and impressive staging of Wang’s photos or Hai’s touching “before-and-after” style, but the underlying messages and deeper cultural resonance in both artists’ work — the devolution of China from the world’s center of culture and imperial splendor into consumeristic squalor, blindly following the lead of foreign/western countries; and Hai’s juxtaposition of the fervent, often violent, aggressively nationalistic Red Guard and youth of the Cultural Revolution with their present-day appearance, the sharp lines of their smiling, black-and-white faces replaced by sagging jawlines and eyes which have seen their country turned upside down and the idealistic actions of their youth relegated by the government to a footnote, an “experiment” in modern Chinese history. 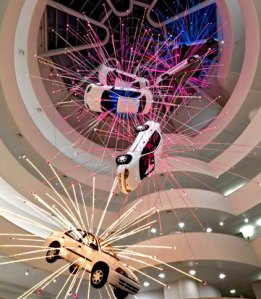 The important point we’re trying to make, in a long-winded way, is that the work of the artists that have recently been acquired by major museums throughout the west in many ways buck the trend of the broadly-appealing Chinese artwork that has been a major focus in recent years. It looks like museums are warming up to contemporary Chinese artists who are not content with simply painting Mao wearing a bikini and reaching out to the marketing machine. Installations like the Metropolitan Museum of Art‘s “Cai Guo-Qiang on the Roof: Transparent Monument” and the Guggenheim’s major retrospective of the same artist last year show that conceptual Chinese art is as legitimate as that from any other major art-producing country.

Put simply, museums, collectors, and galleries are getting more engaged with these artists’ work. We cannot state enough how huge of a development we believe this is. And we feel that as Chinese artists see that their work is taken seriously overseas, the effort and imagination that they put into their work will duly increase, keeping quality consistent (or rising) and ensuring that contemporary Chinese art is never again dismissed as a “fad.”

8 responses to “Chinese Art Coming To a Museum Near You”